I adore hummus, especially as a picnic dip. But what if you want to mix it up a bit or maybe add a seasonal twist to your fall picnic finger food and appetiser repertoire? Smoked pumpkin hummus is the answer.

Actually, smoked pumpkin hummus is the answer any time of year. It’s incredibly creamy, a little sweet and subtly smoky. Of course, you can make it super smokey, but I tend to lean towards the less is more approach when it comes to smoke.

What to Serve With Smoked Pumpkin Hummus

Much like hummus, this smoky pumpkin dips lends itself to mezze plates with roasted vine tomatoes and grilled peppers, anything with pita and fresh bread, or even as a side dip to a cheese platter with crostini.

Serve pumpkin hummus as a side to bbq meats with pita and salad. Marinated kebabs are perfect picnic bbq food for this.

While it may sound strange to have double smoke, making a whole smoked chicken at the same time gives you loads of picnic menu options. Pair the smoky pumpkin hummus with cold smoked chicken pieces.

The sweetness of the pumpkin and subtle smokiness works wonderfully with the smoked chicken without being too much. Serve with fresh bread and a light yoghurt based coleslaw for an easy and healthy picnic lunch.

How Long Will Pumpkin Hummus Keep

The same as our homemade hummus recipe, pumpkin hummus will keep for up to 5 days in an airtight container in the fridge and can be frozen for up to 6 months.

Divide into portion size containers for freezing. Don’t fill the containers all the way to the top as the hummus will expand.

Place the frozen hummus in the fridge the day before if possible to defrost and give a good stir before serving to bring the creaminess back.

How to Make Smoky Pumpkin Hummus

What Pumpkin to Use

Some people will shortcut and use a tin of pumpkin puree (along with smoke flavourings mentioned below). While this is fine if you are really short on time or don’t have the facilities to smoke pumpkin, using fresh pumpkin, smoking and roasting will result in a much better flavour and texture.

For this recipe, I used a small kabocha squash or Jap pumpkin because of its sweet flavour and texture similar to sweet potato. I have also used butternut squash for this recipe for the same reasons. Either is fine.

Getting The Smoked Pumpkin Flavour

While it is possible to make smoked pumpkin hummus using flavourings such as Smoked Paprika or liquid smoke, this recipe calls for pumpkin smoked using wood chips on the bbq.

It will take some extra time but is very little effort and worthwhile for the resulting flavour and texture of the hummus.

If you must use smoke flavourings, add 1/2 a teaspoon of either to the hummus when blending the pumpkin in. Oven roasting the pumpkin is preferable to puree or boiling as roasting will give more flavour from caramelisation.

Cut the pumpkin in quarters. I leave the skin and seeds as they are easier to remove when cooked. You can also use the smoked pumpkin seed for garnish if you like.

Using a gas bbq with a closing lid, there are two ways you can smoke the pumpkin.

We use a small inexpensive smoker box to place wood chips such as apple, cherry, or mesquite in (you can use any flavour you like).

If you don’t have a smoker box, you can also place about half a cup of wood chips into foil and fold into a packet. Place a small hole in the top of the packet for the smoke to escape and place on the grill next to the pumpkin with the bbq lid closed.

We recommend this same method for adding smokey flavour to eggplant for making baba ganoush. 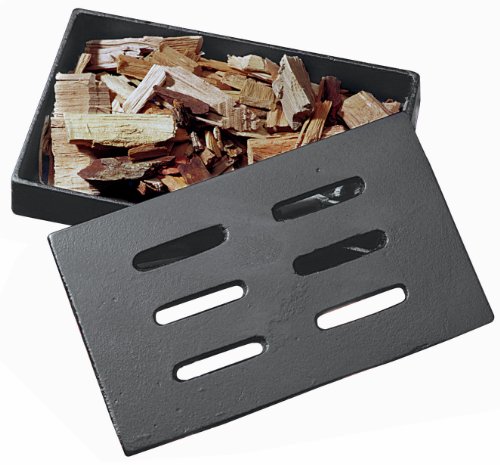 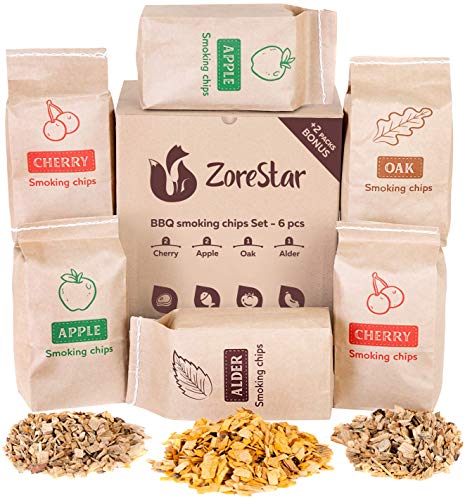 Place the quartered pumpkin on the bbq and cook at 275 ℉ | 135 ℃ for about an hour. You can use a basic thermometer probe if your bbq doesn’t have a temperature gauge. As I mentioned, we usually smoke the pumpkin while we are doing a whole smoked chicken so find a thermometer very handy.

A whole smoked chicken is excellent for a picnic lunch of cold chicken pieces and salad or picnic sandwiches such as our fig and chicken baguette where we often use smoked chicken breast to compliment the sweet figs.

After an hour, if your pumpkin is still not soft enough (you want it to be very soft) finish it off in the oven.

If you don’t want too much of a smokey flavour, just a subtle smokiness, pull the pumpkin off earlier, maybe after half an hour, and finish in the oven.

Finishing the pumpkin on the oven also gives the pumpkin some of that lovely caramelisation you get from roasting. All of this will make the hummus even more delicious.

Make Your Base Hummus First

I like to make my base hummus first (recipe below) to get those flavours and textures right first. (Pumpkin recipe instructions to follow below).

See the full post on this easy hummus recipe here for more notes and tips on homemade hummus.

Note: Because the pumpkin is so soft and moist, it will make the consistency a lot wetter than normal hummus, so allow for this when adding liquid to your base hummus – Lean towards the thicker side.

If you decide to use dry chickpeas, it is important they are well soaked or cooked before blending them into hummus. To achieve a really creamy hummus, the chickpeas need to be quite mushy. Some even choose to soak and cook them. Soaking and cooking your chickpeas in a little baking soda is a trick advised by some of the worlds best hummus chefs.

You can use plain water or the cooking water or liquid from the chickpea can. This is called the Aquafaba. Some believe the aquafaba will enhance your hummus but it is just as fine to use water - just don't add too much of either as it can make your hummus runny and make sure it is cold.

Whether using canned or dry chickpeas, peeling the skins is recommended to achieve a smoother, creamier hummus. But, if you really can't be bothered, the difference will not be that dramatic, just make sure you blend really well.

Add all ingredients to the chickpeas incrementally as you blend to achieve the right flavour and consistency. You can always add more seasoning and liquid, you can't take it away.

As an Amazon Associate and member of other affiliate programs, I earn from qualifying purchases at no extra cost to you.

Making Your Hummus into Pumpkin Hummus

Because the pumpkin is so soft and moist, it will make the consistency a lot wetter than normal hummus. Allow for this when adding liquid to your base hummus – Lean towards the thicker side.

If you don’t want too much of a smokey flavour, just a subtle smokiness, take the pumpkin off the bbq earlier and finish in the oven for longer. You can also use more or fewer woodchips depending on your taste.

If you don't have time or facilities to smoke the pumpkin, you can always roast in the oven, or even boil the pumpkin and use smoked paprika or liquid smoke to achieve the smokiness. If possible, try to roast the pumpkin over boiling as the roasting will add to the caramelisation of the pumpkin and the flavour of the smoked hummus.

How Much Pumpkin to Add

For the hummus recipe given, I would add half of the whole smoked pumpkin. The rest of the pumpkin can be used for other dishes. If you would like to divide your base hummus recipe into two, you can reduce the pumpkin again and have a batch of traditional hummus and a batch of pumpkin hummus.

As an Amazon Associate and member of other affiliate programs, I earn from qualifying purchases at no extra cost to you. 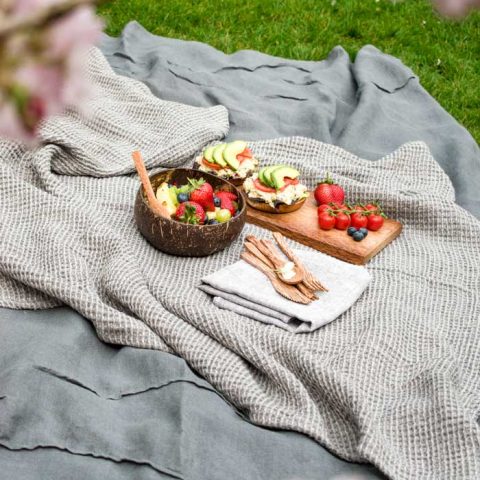 Picnics shouldn't be complicated. These tips for picnic perfection will help simplify any of your al fresco dining endeavours.

Easy Hummus Recipe
Next Post: 5 Unique Brownie Recipes for Your Next Picnic 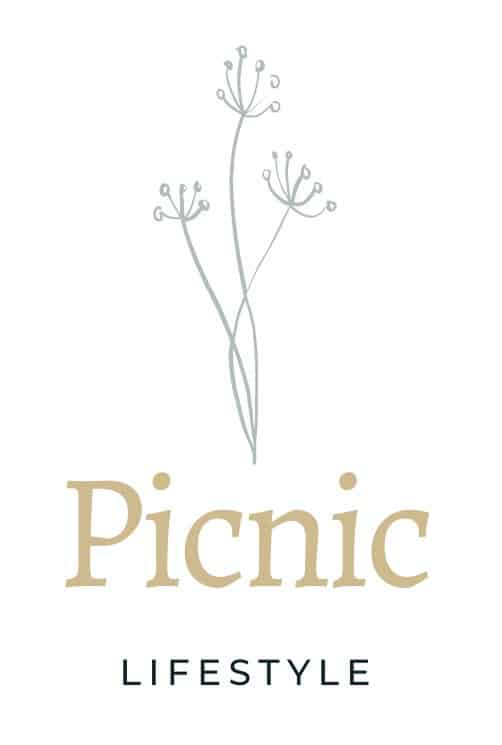 In celebration of al fresco dining and the portable feast. A lifestyle guide dedicated to creating perfect picnics for all occasions.

We use cookies to ensure that we give you the best experience on our website. If you continue to use this site we will assume that you are happy with it.OkPrivacy policy