Can Hash browns be Healthy? Sure, especially if you bypass deep-fried and try oil-free air fryer hash browns. But if you want low carb, cauliflower is where it’s at.

These healthy Keto-friendly Cauliflower Hash Browns are the low carb, low-calorie alternative that tastes as good as potato hash browns but is better for you.

These tasty, crispy little darlings make a great addition to a brunch menu and are so versatile beyond the breakfast table so are perfect for a low carb or keto picnic menu. They’re also just as good cold as they are hot.

Can I Use Frozen Pre Riced Cauliflower?

How to Make Crispy Hash Browns

Squeezing as much moisture from the cauliflower rice is the most important step in this hash brown recipe. Removing that moisture will help bind the mix, prevent soggy hash browns and make them crispy. We give you more tips for removing the moisture in the recipe card.

Also, avoid making them too thick, don’t overcrowd your pan if shallow frying, Make sure the pan and oil are hot before putting the mix in and have the heat high enough to get that golden finish without burning. Don’t use too much oil, there is no need to deep fry these hash browns.

Same for oven cooking, not too thick, don’t overcrowd the baking sheet and have your oven nice and hot as if you were cooking oven fries. 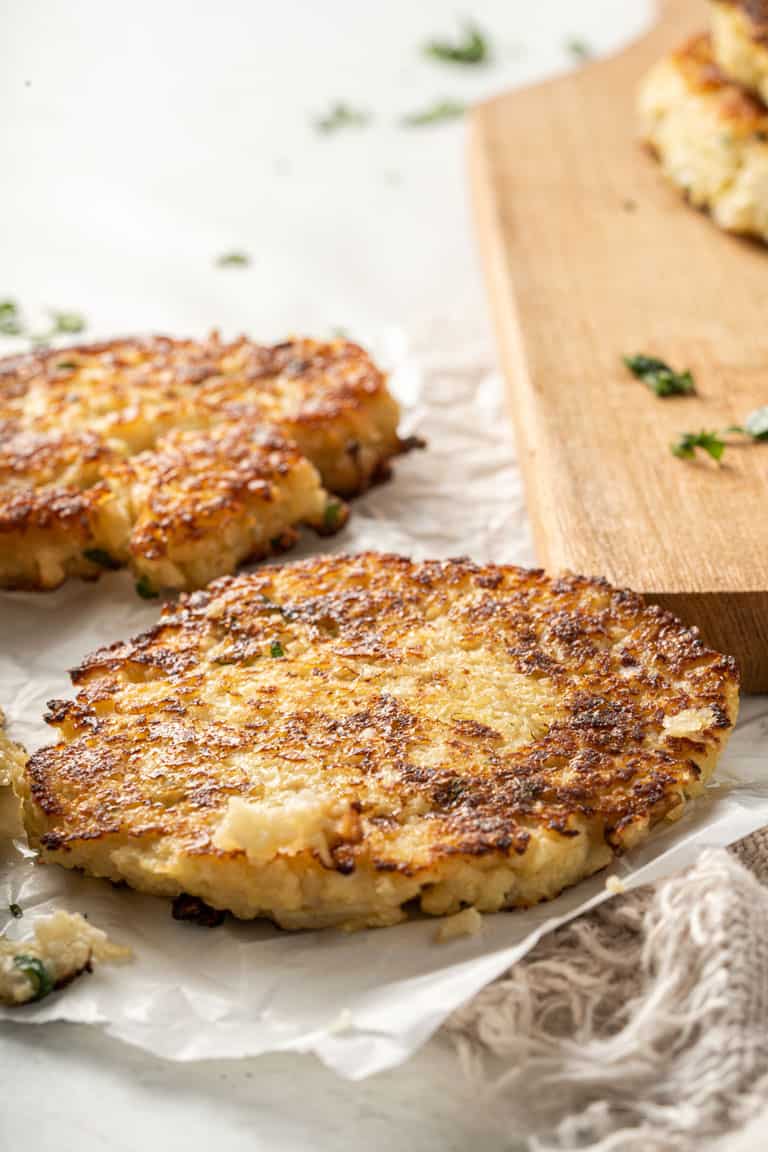 Can I Make Hash Browns Ahead of Time?

Yes, you can. Riced Cauliflower Hash Browns reheat really well either in the pan or in the oven at around 350F (I don’t recommend the microwave). You can keep a batch in the fridge and reheat them as you need. They are also delicious cold, let them sit out of the fridge for half an hour or so before eating.

These low carb hash browns will keep for 3-4 days in an airtight container in the refrigerator.

These Riced Cauliflower Hash Browns freeze really well. Cook them either in a pan or in the oven and leave them to cool on a baking sheet in a single layer on parchment paper. Once they are cool, transfer that single layer to the freezer to flash freeze the hash browns. Once they are hard, transfer them to an airtight container (you may want to separate layers with parchment paper). They will keep well for 2-3 months. You can reheat them from frozen in the oven or a skillet pan.

A celebration of al fresco dining and the portable feast. A lifestyle guide dedicated to creating perfect picnics for all occasions.